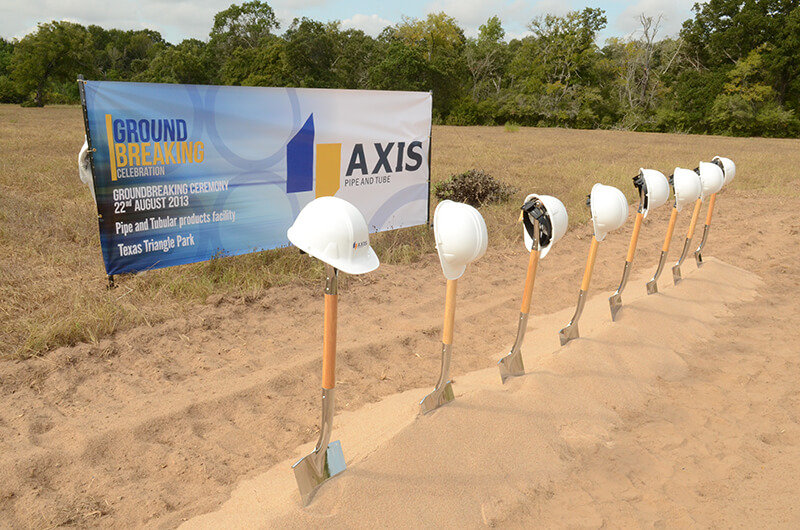 PROLAMSA announced on April 2013 the construction of a new plant of oil pipes (API) with an annual capacity of over 300,000 tons. The plant will be located in the “Texas Triangle” industrial park in the city of Bryan, TX.

It is expected to generate over 285 jobs. The company expects to begin formal operations in the middle of 2014 and its purpose is to cover the growing demand of pipes for the oil and gas industries. The company will operate with the name of AXIS Pipe and Tube and will be integrated to the portfolio of companies of PROLAMSA Group.

The city of Bryan, TX is located in the county of Brazos and was selected after an exhaustive evaluation process that included other locations in the southeast of the United States. Among the reasons to select this location, a friendly business environment, qualified workforce and the proximity to a broad client base stand out. PROLAMSA Group acknowledges the intense work of several local civil servants that participated in the selection process.

A spokeperson for the company declared: “All the involved, from the office of Governor Perry, the civil servants of Brazos county and the city of Bryan, and the consulting office of Research Valley were very polite and helpful when providing us all the necessary information for our decision. They made us feel that they genuinely wanted us as neighbors and business partners”. The first stage of the construction is expected to conclude in the fourth trimester of 2013.

The installation of the machinery is expected to conclude in the second trimester of 2014. The plant, with a total extension of 740,000 m2 will produce oil pipes under the API regulation in diameters of over 16 inches, with a wall thickness of up to 0.625 inches. In addition, it will also produce tubes for construction under the ASTM regulation. The shipping and reception, of clients and suppliers respectively, will be through railroad and trucks.

PROLAMSA Group was founded in 1954 and it is the leader in several markets in North America. It has several plants and distribution centers in Mexico and the United States. The company is recognized due to its quality and variety of its products.